“I thought my tip was automatically added to my bill and given to you guys. Isn’t that true?”

Like Jim, most people have a misunderstanding that Uber automatically includes a tip to driver. The truth is that the Uber system never does so. Uber takes a 15-25 percent cut from drivers’ total earnings, which is based on the charged fare that we see in the Uber app when completing a trip – and that fare does not include a tip. Tipping has been an American tradition for ages, so perhaps you’re feeling a bit uncomfortable to realize you haven’t rewarded your Uber drivers as you would have most service providers. Traditional taxi drivers expect tips (and we expect to give them). So why shouldn’t we tip our beloved Uber drivers who are providing hassle-free and affordable transportation, with a level of civility rarely found in a big-city taxi?

Uber’s policy from the outset has been that there is no need to tip their partner drivers.  In fact, part of the appeal of the Uber platform is that you have a pretty good idea of what you ride costs will be, without surprises or surcharges of any kind. 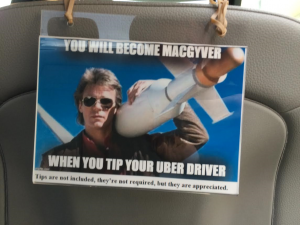 The Uber rider app doesn’t even have an option to tip drivers whereas rival Lyft does allow riders to tip their drivers through the app.  (There is an option to set a standard percentage for a tip when using the Uber Taxi service.) Actually, Uber doesn’t allow this option for several reasons which we’ll get into below. Meanwhile, be aware that saying there is “no need to tip” doesn’t mean tipping is actually discouraged – certainly it is not prohibited.

So ultimately it is more a corporate decision about what kind of service Uber wants to provide. Ultimately there is no restriction on giving tips (except that it can’t be done through the app). They just say that tips aren’t required or expected. So there won’t be any problem whether or not you pay a gratuity to your Uber driver after a comfortable ride.

Why should you tip Uber driver?

Uber drivers work as independent contractors rather than employees. That means they don’t have employee protection like health care, sick leave, overtime, etc. Furthermore, an Uber driver has to pay for gas, vehicle maintenance and repair, car payments/leases, self-employment taxes, etc. And Uber also takes 15-25 percent service from a driver’s total earnings.  We may see that Uber drivers are earning more money than taxi drivers. But the final take-home amount is not so much as we think.

How do you tip Uber driver?

As there isn’t any tip option inside the app, you can tip your Uber driver through PayPal or Venmo if the driver willing to give you his/her e-mail address. You can also carry a few dollars with you to tip your driver. If you can’t tip the driver, at least be sure to give him/her a good rating, which will contribute toward their long-term success.

UberTAXI is an Uber service that connects riders with licensed yellow cabs. This service has an exception that includes a tip percentage that you can set in your app. The ider pays through the app, and the tip goes to the cab driver. But this feature is not available for other Uber services.

So it’s up to you if you tip Uber drivers or not. But if they deserve it, why not? – they will definitely appreciate it.